Who needs flood insurance?  Answer is Everyone!

And almost everyone in a participating community of the National Flood Insurance Program (NFIP) can buy flood insurance. Nationwide, more than 20,000 communities have joined the Program. In some instances, people have been told that they cannot buy flood insurance because of where they live. To clear up this and other misconceptions about National Flood Insurance, the NFIP has compiled a list of common myths about the Program, and the real facts behind them, to give you the full story about this valuable protection.

MYTH: You can’t buy NJ flood insurance if you are located in a high-flood-risk area.

FACT: You can buy National Flood Insurance no matter where you live if your community participates in the NFIP, except in Coastal Barrier Resources System (CBRS) areas. The Program was created in 1968 to make federally backed flood insurance available to property owners who live in eligible communities. Flood insurance was then virtually unavailable from the private insurance industry. The Flood Disaster Protection Act of 1973, as amended, requires federally regulated lending institutions to make sure that mortgage loans secured by buildings in high-flood-risk areas are protected by flood insurance.
Lenders should notify borrowers, prior to closing, that their property is located in a high-flood-risk area and that National Flood Insurance is required.

MYTH: You can’t buy flood insurance immediately before or during a flood.

FACT: You can purchase National Flood Insurance at any time. There is usually a 30-day waiting period after premium payment before the policy is effective, with the following exceptions:
1. If the initial purchase of New Jersey flood insurance is in connection with the making, increasing, extending, or renewing of a loan, there is no waiting period. Coverage becomes effective at the time of the loan, provided application and payment of premium is made at or prior to loan closing.
2. If the initial purchase of flood insurance is made during the 13-month period following the effective date of a revised flood map for a community, there is a 1-day waiting period. This applies only where the Flood Insurance Rate Map (FIRM) is revised to show the building to be in a Special Flood Hazard Area (SFHA) when it had not been in an SFHA.
The policy does not cover a “loss in progress,” defined by the NFIP as a loss occurring as of 12:01 a.m. on the first day of the policy term. In addition, you cannot increase the amount of insurance coverage you have during a loss in progress.
MYTH: Homeowners insurance policies cover flooding.

FACT: Unfortunately, many home and business owners do not find out until it is too late that their homeowners and business multi-peril policies do not cover flooding. The NFIP offers a separate policy that protects the single most important financial asset, which for most people is their home or business. Homeowners can include contents coverage in their NFIP policy. Residential and commercial renters can purchase contents coverage. Business owners can purchase flood insurance coverage for their buildings and contents/inventory and, by doing so, protect their livelihood.

MYTH: Flood insurance is only available for homeowners.

FACT: Most people who live in NFIP participating communities, including renters and condo unit owners, are eligible to purchase federally backed flood insurance. A maximum of $250,000 of building coverage is available for single-family residential buildings; $250,000 per unit for residential condominiums. The limit for contents coverage on all residential buildings is $100,000, which is also available to renters. Commercial structures can be insured to a limit of $500,000 for the building and $500,000 for the contents.The maximum insurance limit may not exceed the insurable value of the property.

MYTH: You can’t buy flood insurance if your property has been flooded.

FACT: You are still eligible to purchase flood insurance after your home, apartment, or business has been flooded, provided that your community is participating in the NFIP.

MYTH: Only residents of high-flood-risk areas need to insure their property.

FACT: All areas are susceptible to flooding, although to varying degrees. If you live in a low-to-moderate flood risk area, it is advisable to have flood insurance. Between 20 and 25 percent of the NFIP’s claims come from outside
high-flood-risk areas. Residential and commercial property owners located in low-to-moderate risk areas should ask their agents if they are eligible for the Preferred Risk Policy, which provides very inexpensive flood insurance protection.

MYTH: National Flood Insurance can only be purchased through the NFIP directly.

FACT: NFIP flood insurance is sold through private insurance companies and agents, and is backed by the federal government.

MYTH: The NFIP does not offer any type of basement coverage.

FACT: Yes it does. The NFIP defines a basement as any area of a building with a floor that is below ground level on all sides. While flood insurance does not cover basement improvements (such as finished walls, floors, or ceilings), or personal belongings kept in a basement (such as furniture and other contents), it does cover structural elements and essential equipment.
The following items are covered under building coverage, as long as they are connected to a power source, if required, and installed in their functioning location:
• Sump pumps
• Well water tanks and pumps, cisterns, and the water in them
• Oil tanks and the oil in them, natural gas tanks and the gas in them
• Pumps and/or tanks used in conjunction with solar energy

FACT: One of the NFIP’s primary objectives is to guide development away from high-flood-risk areas. NFIP regulations minimize the impact of structures that are built in SFHAs by requiring them not to cause obstructions to the natural flow of floodwaters. Also, as a condition of community participation in the NFIP, those structures built within SFHAs must adhere to strict floodplain management regulations enforced by the community.
In addition, the Coastal Barrier Resources Act (CBRA) of 1982 relies on the NFIP to discourage building in fragile coastal areas by prohibiting the sale of flood insurance in designated CBRA areas. While the NFIP does not prohibit property owners from building in these areas, any Federal financial assistance, including federally backed flood insurance, is prohibited. However, the CBRA does not prohibit privately financed development or insurance.

MYTH: The NFIP does not cover flooding resulting from hurricanes or the overflow of rivers or tidal waters.

FACT: The NFIP defines covered flooding as a general and temporary condition during which the surface of normally dry land is partially or completely inundated. Two properties in the area or two or more acres must be affected. Flooding can be caused by:
• Overflow of inland or tidal waters, or
• Unusual and rapid accumulation or runoff of surface waters from any source, such as heavy rainfall, or
• Mudflow, i.e., a river of liquid and flowing mud on the surfaces of normally dry land areas, or
• Collapse or subsidence of land along the shore of a lake or other body of water, resulting from erosion or the effect of waves, or water currents exceeding normal, cyclical levels. 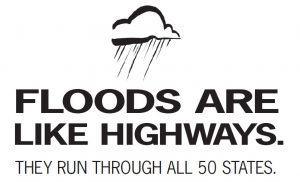